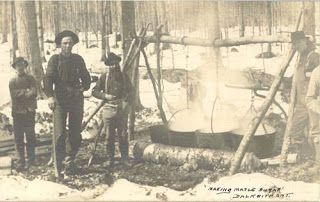 A Tanner and his Boots... 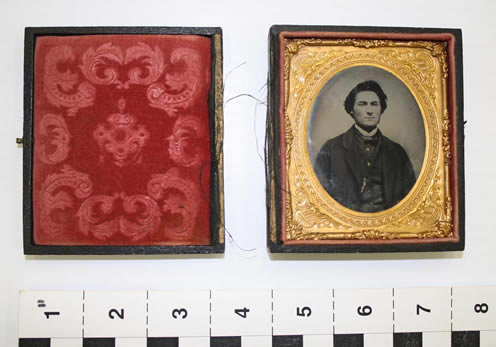 Simon Fraser (1834 - 1918) owned and operated a Tannery on the Lochinvar Rd. in Lochiel Township in the second half of the 19th century. Previous to this, he trained at a Tannery in Lancaster, moved on to work for a Tannery in Vankleek Hill and then finally opened his own prosperous business in the Lochiel township of Glengarry. Simon Fraser was also the Post Master of the McNab post office which he operated from his home near the Tannery. In actuality, his wife Isabella (McCrimmon) Fraser took care of the postal operation while Simon Fraser was busy at the Tannery. Their son, Dan A. Fraser took over the tannery for a short while, until it closed shortly after the death of Simon Fraser in 1920.
Several artifacts that belonged to Simon Fraser were thoughtfully preserved by his grandson, Donald S. Fraser and were donated to the Glengarry Pioneer Museum by his estate in September of 2010. 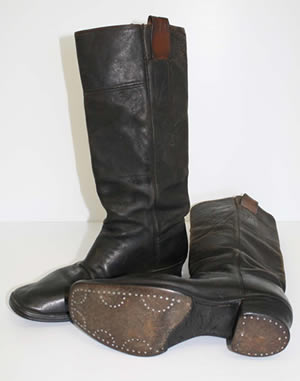 Boots belonging to Simon Fraser
In a letter written by his grandson Donald Simon Fraser on September 16, 1998, it describes the boots as follows:
“Pair of dress boots worn by Simon Fraser, Tanner of  Lochinvar. Made by J.S. McKinnon shoemaker of St Eugene in early 1890's; calfskin leather produced by Simon Fraser. Cleaned and oiled by Lynn McNab. Restored in Sept 1998. A family story indicates the age of the boots. When my mother came to Lochinvar as a bride in 1910 she shortly thereafter went to the local general store and purchased new linoleum for the kitchen floor and the store keeper, Thomas McCuaig remarked to her that when the old gentleman walked around the kitchen in his 20 year old boots it would test the new floor.”  -  Donald S. Fraser.
- April 05, 2013 No comments: