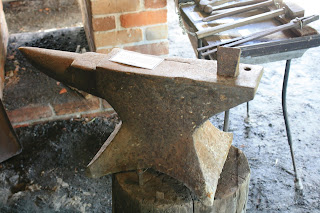 This week’s featured artifact from our Blacksmith Shop is the Forge. The Forge was the most important part of the Blacksmith Shop. The Forge was made of bricks and had an open hearth or fireplace that was raised off the floor. The forge and its heat allowed for a blacksmith to heat iron which made the iron malleable or easier to shape. A blacksmith had to know how to control the size and temperature of the fire that was created in the Forge. He would judge the temperature by the change in colour and would adjust its heat to suit each of his tasks. The blacksmith would heat the iron until it was red, orange, yellow, or white. A dull red fire was used to smooth iron without changing its shape, whereas a white-

hot fire made iron the most flexible. If the blacksmith needed the fire to be hotter, he would have added more coals and blew air on the flames. If he needed the fire to be cooler, he would have flicked cold water onto the coals. Once the iron was heated, the blacksmith was able to pound it with a hammer and craft things such as pots, pans, horseshoes, farming tools etc. Our Forge in the Olivier Hamelin Blacksmith Shop was rebuilt in 2014 in order to keep it up and running for blacksmith demonstrations at our special events.

What is a Blacksmith you may ask?

The village smithy, or blacksmith shop, was often located at the corner of two main roads so that it was easy to find. A blacksmith was a place where various types of tools and other objects were made out of metal.  It wasn’t unusual to see several people waiting at the shop for their objects due to the fact that the smithy was a popular meeting place in the 1800’s.

The role of a blacksmith was very diverse, not only was he the local toolmaker and “engineer,” he was sometimes called upon to act as a dentist, doctor, vet etc. The blacksmith was at the heart of every country village. The blacksmith often crafted the tools farmers needed such as metal parts for plows, hoes and rakes. He would have sharpened and repaired these items as well. Most people in the 1800’s owned iron objects such as pots and pans for cooking over an open fire in which the blacksmith would have made. He would also make useful objects like candle holders and lanterns for lighting the rooms in home and barns. Larger towns often had many blacksmiths who would become experts at forging one type of object; such as a locksmith who made locks and keys.

This summer we are proud to present the Blacksmith Festival, Smith-In, on June 25th and 26th 2016. Every ‘Smithing Saturday, a blog post will be available about our Blacksmith Shop here at the Glengarry Pioneer Museum including fun facts and information about some of the artifacts and history behind it. Join me this Saturday,  June 4th,  for some fun facts on what a blacksmith is! 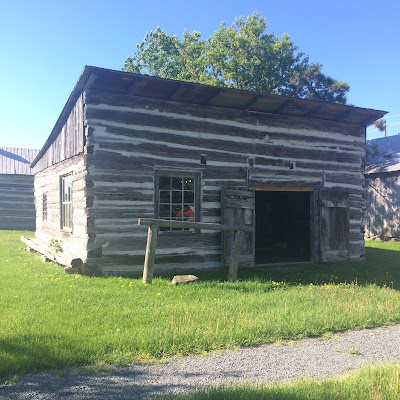