This photograph depicts Mr. James Denovan, his wondrous moustache and beard gleaming as he stands on a porch which surrounds a large brick house. Mr. Denovan was born in 1841 and passed away in 1895. He was killed during a barn raising bee at John MacLeods; a tragic, and unexpected accident,  that created an unusually large gathering at his funeral service as neighbours wanted to pay their respects to the shocked family. The Glengarry Pioneer Museum has many records about Mr. James Denovan, including his obituary- which provided the above information- his coffin plate, various photographs, even the boots he was wearing when he was killed.  These records give us an opportunity to learn more information about Mr. Denovan...and his photographs allows us to marvel at his magnificent facial hair!

This photo was graciously donated to the Glengarry Pioneer Museum by Mr.John Lunan, who was married to a Denovan descendent.
- June 30, 2013 No comments: 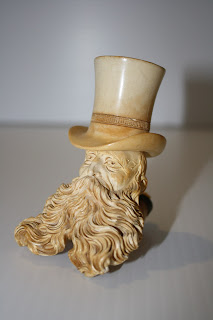 Meerschaum – also known as Sepiolite- is a soft white mineral that is found in deposits around the Mediterranean, and sometimes floating on the Black Sea. It is often used to make smoking pipes (like the one shown above) since its soft texture allows for intricate carving of elaborate designs. As the pipe is used the mineral changes colour, usually turning yellowish, which helps to determine its age and usage.
This Meerschaum pipe was donated by Glen McKenize, a distant relative of the original owner, James Roderick McKenzie. James R. McKenize was born in 1817 on the Isle of Skye, Scotland, and eventually made his way to Canada,  settling in Dunvegan at 21-9 Kenyon. During his life, he was the postmaster of Skye, taught at a local  Dunvegan school house, was a long-time Deacon at Kenyon Presbyterian Church, and  a clerk in the divisional court. James R. McKenize was also a grandnephew of Flora Macdonald, a woman famous for her heroic and romantic devotion to Bonnie Prince Charlie and his Jacobite cause.


It is possible to assume from its yellowing, that this pipe lived a long and pleasant life with its owner. It is now safely stored in the Museum’s temperature- regulated storage facility, ready to be showcased in future exhibits.
- June 25, 2013 No comments:

This week features Mr. Duncan "Duncie" Willie Campbell, looking stern as he showcases his triumphant moustache.  He was photographed at H.R McGibbon's studio in Hawkesbury. The exact date this photograph was taken is unknown, but it is believed to have been around 1901.

If you recognize any of the men featured in our weekly post, and have any additional information you would like to share about them, feel free to email the museum at collections@glengarrypioneermuseum.ca.
We always appreciate learning more about the artifacts in our collection!
- June 23, 2013 No comments:


This type of surveyor's chain was widely used in Britain, the Eastern United States and older areas within Canada. Along with a compass (shown below), the surveyor would use this chain to measure lots of land for settlers.
Each chain had swivel links which were intended to keep the chain from kinking. The marker tags allowed the surveyor to read off any distance within the hundred-foot length of the chain at a glance and be correct to within one inch.
﻿﻿﻿﻿﻿﻿﻿﻿﻿


This photograph was taken by Duncan Donovan in his Alexandria studio. The Glengarry Pioneer Museum has a large collection of Donovan photos, many of which are displayed in the temporary exhibit, “Portraits of the Past.”
- June 16, 2013 No comments:

The Story Behind the Blue Willow Plate 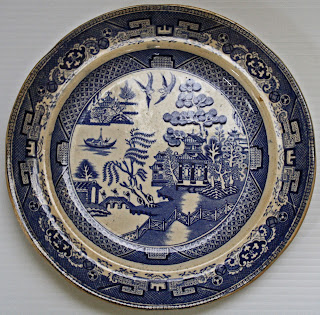 This plate has a pattern known as “Blue Willow.” It was designed in England by Thomas Minton around 1790. Willow refers to the pattern, and it uses a specific treatment known as transferware. This process is when the pattern is applied, transferred, or stamped onto the ceramic piece, rather than hand painted, saving time and cost. The background color is always white, while the foreground color depends on the maker. Blue is the most common colour, followed by pink, green, and brown.


In order to improve the sales of the “Blue Willow” plate, Minton created a story based on the design. It has been told as follows; once there was a wealthy Mandarin, who had a beautiful daughter. She had fallen in love with her father's humble accounting assistant, angering her father. He dismissed the young man and built a high fence around his house to keep the lovers apart. The Mandarin was planning for his daughter to marry a powerful Duke. The Duke arrived by boat to claim his bride, bearing a box of jewels as a gift. The wedding was to take place on the day the blossom fell from the willow tree. On the eve of the daughter's wedding to the Duke, the young accountant- disguised as a servant- slipped into the palace unnoticed. The lovers escaped with the jewels, but the alarm was raised. They ran over a bridge, chased by the Mandarin with a whip in hand. They eventually escaped on the Duke's ship to the safety of a secluded island, where they lived happily for years. However, one day the Duke learned of their refuge and sent an army to seek his revenge. The Gods, moved by the misfortune of the lovers, transformed them into doves to live on in tender bliss.  This romantic fable can be explained on the plate by its decoration; the boat, island, fence and bridge all are shown, under the presence of the two love birds in the sky.
- June 10, 2013 No comments:

Having great facial hair must run in the family, or at least in this one it does! This photo depicts the MacRae brothers, photographed in 1871. The photo is part of the tintype process of photography [also know as also melainotype or ferrotype] and was used in the mid-1800s to early 1900s, primarily. The image, which was underexposed, was produced onto a sheet of iron metal and then coated with black paint, lacquer, or enamel to darken it. It evolved out of ambrotype photography, which placed a negative image onto glass, then used reflective light and a dark background in order to make the negative look like a positive image. The use of tintype photography reduced the cost considerably, proved to be very durable, and therefore became very popular. It was also an excellent way of capturing some impressive facial hair; although this picture is darkened, the moustaches of these brothers still steal the show!


Learn more about photography, photographic processes, and moustaches by stopping by the museum!
- June 09, 2013 No comments: 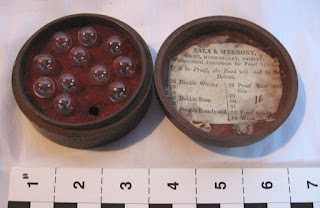 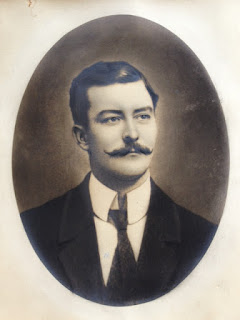 Introducing Moustache Mondays, a new weekly post, featuring some of the museum’s best moustaches! This week David Murdoch MacPherson (1847-1915) takes the spotlight, a man who has earned the nickname “The Cheese King,” by owning several cheese factories located in Glengarry County, and the surrounding areas of  Eastern Ontario, Huntington, and Chateauguay counties in Quebec, and New York State. At the peak of his cheese producing career, MacPherson owned 78 factories and by 1874, his cheese empire was credited to be the largest cheese factory combination in Canada.  It has also been said that at one point, MacPherson’s factories controlled 1/8 of all cheese production in the country. MacPherson, and his impressive facial hair, are part of the new temporary exhibit called “Portraits of the Past,” displayed in the Orange Lodge. Come stop by to learn more about the “King of Cheese”- and arguably The King of Moustaches- and have a peek at the other captivating portraits from the museum’s collection!
Look forward to this post once a week for all your moustache needs.