This stoning machine was used by farmers around Glengarry to remove boulders from their fields. It was made in the Jamieson's shop in Brodie, Ontario, and would have been in use in the mid to late 19th century. The first stoning machine that they made had to be driven to Kingston in order to get a patent for it.

Farmers would rent this machine for $1.50 a day.Young boys would have to work ahead of the machine and chisel holes into the stone so that the grapples can grip the stone and then, using horse power and  a lever system, the stone would be lifted from the field. Some stone fences around Glengarry still have large stones with holes on the top of them, which is a trademark of this machine.

This drawing of the giant machine was sketched for the museum by Ross Mclean.
- July 30, 2013 No comments: 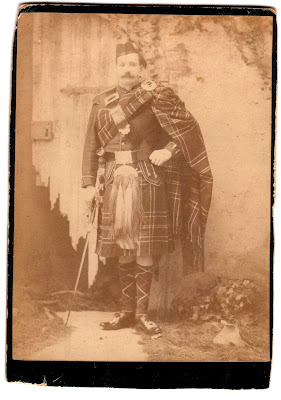 In honour of the Glengarry Highland Games this weekend, we have added some Scottish heritage to our Moustache Monday as we feature an unknown Scotsman with a brilliant kilt and a merciless moustache. The photo was donated to the museum by Georgia Dion of Kanata, who's family- and great-grandfather, Danial McCraig-  have a connection to the McCraigs in Glen Robertson.

If you have any additional information about this unknown Scotsman, or any of our past featured gentlemen, we would love to hear it. You can let us know by emailing the museum at collections@glengarrypioneermuseum.ca

We are open everyday of the Glengarry Highland Games from 10am-5pm, so come stop by on your way to the games and learn how the first Scottish settlers of Glengarry lived!

This is a Scottish Highland Dirk,  a traditional and ceremonial sidearm for the officers of the Scottish Highland Regiments. A dirk is a long thrusting dagger that was used as a personal weapon for officers engaged in hand to hand combat. It was developed as a military item for the Regiments during the Jacobite Uprising in the late 17th to early 18th century; becoming most popular in the mid-1700s. The design is still used today  and hasn't changed for the last 200 years, although it is now more of a ceremonial piece rather than a weapon.
The original owner of this dirk was Duncan MacDonald who lived at  Lot 3, 5th Concession Lochiel, and had worked with the Hudson's Bay Company for a period of time. It was donated to the museum by his great grand nephew, Donald MacDonald of Vankleek Hill, in 1963.

This week we are showcasing Malcolm Archibald MacRae's magnificent moustache and sideburns. He is pictured here with his leading lady, Annie Locklan Stewart. The couple lived at Lot 4 , Concession 4 in the township of West Hawkesbury, and had ten children. Many of their descendants live around Glengarry County.

There are two other photographs of the couple in the museum's collection; one with all ten of their children, and one of them later into their lives. All three are currently on display in the Orange Lodge for the "Portraits of the Past" display, and it must be said that Mr. MacRae has exquisite facial hair in each of them.
- July 22, 2013 No comments:


This sugar bowl is a type of Portneuf  pottery; it is also referred to as Portneuf spongeware because of its pattern, which would have applied to the bowl with a sponge technique.  In the mid-1800s, a ship sailing from Scotland through the St. Lawrence to British North America, sunk near Portneuf, Quebec. The ship was carrying several pieces of pottery, and many of these pieces were salvaged after the wreck. This incredible story made this pottery-  classified now as "Portneuf Pottery"- quite rare and sought after.

This piece, as well as a few other artifacts (including a past Featured Artifact, the Meerschaum pipe), will be on display at the museum this weekend for our "What's It Worth?" event. It will part of an exhibit that allows visitors to guess how much they think these rare and interesting artifacts are worth. Come stop by to check them out, as well as various private collectors showing their collections, antique dealers and sellers, an antique car show& parade, and specialized appraisers to appraise any family heirloom you may have.


How many moustaches can you find in this photo?

Shown above are the members of the Presbyterian Church General Assembly, who were the men responsible for uniting the 4 Presbyterian Churches in the Dominion of Canada. This was accomplished in Montreal on June 15, 1875. The most remarkable feature of this photo is, however, how many of the men had such admirable facial hair. This photo was donated to the museum by Mrs. Alex Stewart from the Skye Road area in 1963. 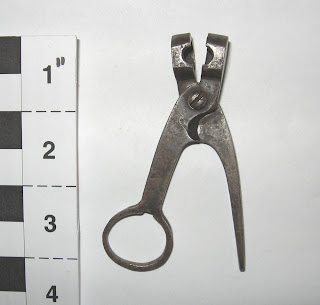 
This week we are highlighting Mr.Duncan Donovan, the man that has captured many of the moustached headliners found in our weekly post, and who has a  pretty distinguished moustache himself!
Duncan Donovan was born on January 4,1857 to Richard Donovan and Sarah MacMillian. They lived on East 1/2 Lot 29, 9th Concession of Lochiel Township, and this is where a young Duncan Donovan grew up. In 1899, Donovan married Miss Catherine Campbell. The couple would often attend St.Finnan's Cathedral in Alexandria, and Donovan began making his name as a well-respected photographer there. He began his career while working under Mr. Duncan MacMillian, who had a  studio in Maxville. In 1902, he became a partner in the studio of A.G.A Robinson, and soon afterward he took control of the business under his own name.  Donovan retired in 1924,  and sold his business to Mr.P.A Charlesbois. Eventually Donovan passed away on March 17, 1933, but his legacy was not soon forgotten.
Charlesbois preserved Donovan's glass plates of photographs, which were eventually purchased by the Archives of Ontario, by a well-known Glengarrian, Hugh P. MacMillian. Many of these photos are now part of the museum's collection, others can still be found at the Archives of Ontario in Toronto.  These photographs are cherished by the Glengarry Pioneer Museum as they allow visual insight into the lives of Glengarrians in the late 1800s to the early 1900s. Many of the photographs are featured in a display that is part of the temporary exhibit, "Portraits of the Past," this year. Some others are stored safely away in our climate-controlled storage facility, occasionally brought out to be showcased in exhibits, or used to highlight a glorious moustache or two!
- July 07, 2013 No comments:

This is a Whitney Navy Percussion revolver in .36 Caliber. It holds six shots and has a 7 1/2 octagon barrel, and is of the cap and ball type. The gun is dated around 1858-1861, and was very likely used during the American Civil War.It was produced by The Eli Whitney Company. Eli Whitney was an American inventor of the cotton gin (short for cotton engine); which was an improved method of processing cotton. Eventually his cotton gin company went bankrupt, so Whitney signed a contract with the New American Government and began making guns. He practiced this new profession from around  the French Revolution era (late 18th century) up until the Civil War (1861-1865). This revolver was the precursor of the Col. Samuel Colt Navy Revolver.

Alex Baker McDonald (1872-1965)  was the owner of this revolver. He lived on Lot 33, Concession 5 in Lochiel. McDonald passed the revolver down to his grandson, Basil McCormick, who received this gift  when he was only 10 years old. An older neighbour held on to the revolver until Basil wanted it back in 2002. Basil McCormick then donated it to the Glengarry Pioneer Museum, where it was part of the commemorative 50th anniversary display last year, and is now kept safe in our storage facility for future exhibits. ﻿
- July 02, 2013 No comments: