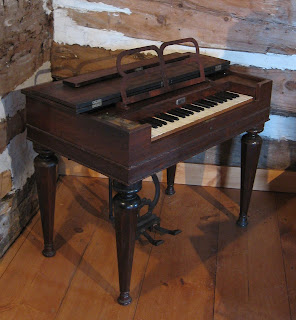 This is a melodeon, a type of 19th century reed organ, which is on display at the museum in the Star Inn. It is covered in rosewood veneered casework. Its marker's mark states that the melodeon was made by "Andrus Bros in London CW"- CW stands for  "Canada West" which referred to the region of Ontario before Confederation. This information puts the melodeon's date from around 1865-1868.  It was originally purchased for Mrs. B. Sara Jane Nicholson by her father, Henry Nicholson. The cost of this instrument was $50 in gold and 100 bushes in grain. There were no local established banks or currency at the time it was purchased.

It was donated to the museum by Mrs. Mabel A.D. (Barrett) Stewart in memory her mother, Mrs John Barrett.
- August 27, 2013 No comments: 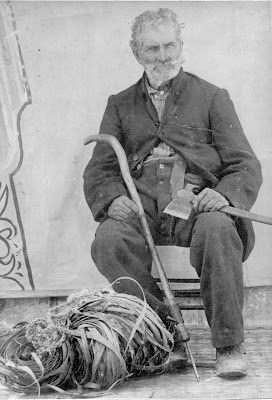 Mr. Allan MacRae's cane and picture was on display at the museum this past weekend for the annual Glengarry Wood Fair, and it was decided that his moustache is just too wonderful not to have him featured in a Moustache Monday post. Mr. Allan MacRae lived an intriguing  life, earning some interesting nicknames such as Black Allan the Dogs, Allan Gorrach, Allan the Dog or Allan na Coin. He was even represented as a character (Allan Gorrach) in Ralph Connor's novel Glengarry School Days in 1902, as a wild eccentric who lived in a shack. Allan MacRae seems to have this mysterious air about him, represented in oral history as a homeless wanderer who travelled the countryside, finding lodging wherever the curiosity or charity of people allowed. He made  wooden objects such as  potato mashers and butter ladles, fixed chairs using elm trees, and also had the habit of disposing unwanted dogs by selling their hides or turning them into mitts. Less known, but equally as interesting, he apparently had a lovely singing voice in both English and Gaelic, was an exceptional storyteller and brought the news to the townspeople. At one point of his life, he actually did lived in a cabin in the woods- Lot 11 in the 19th Concession of Indian Lands near Maxville- which assisted the portrayal of him in Glengarry School Days.

No matter this man's history, he had wonderful facial hair and a grim stare which earned him a spot on our Moustache Monday post.  The museum has collected a few of his things, including the cane shown in this photo, and some chairs that he is believed to have fixed. At your next visit to the museum, be sure to ask the staff about this interesting man, and to point out of these historical chairs! 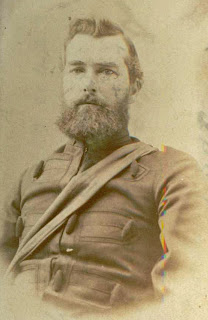 Not only was Dr.Donald McDiarmid (1840—1910) a bearer of magnificent facial hair, he was also a physician, school inspector, and a military captain. He was born in 1840 in the town of Killin, Scotland. He earned his education in Canada, and became a graduate in Medicine from McGill University in 1867. He practiced medicine in Cornwall, then Athol, and in 1892 moved the practice to Maxville. Besides his medical work, Dr. D. McDiarmid also  inspected public schools in Ontario for many years. In 1868, he joined a militia company that formed in Dunvegan in response to the Fenian threat. He remained in the militia until 1884, rising to the rank of major. It was remembered that in this company, all the men “spoke the Gaelic with greater fluency than they did English.”


One of Dr. D. McDiarmid’s sons—William (born 1867) followed his father’s path in becoming a graduate of McGill and medical doctor in Maxville. Dr. Willie, as he became known, was also involved in politics. In 1940, he was elected to the House of Commons as a Liberal for Glengarry. Shortly after election, he gave up his seat to Mr. Mackenzie King,  who was Prime Minister of Canada at the time. 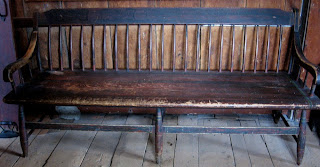 There are many beautiful and wonderful pieces of furniture in our collection here at the Glengarry Pioneer Museum.  One of such pieces is the bench shown above. It belonged to the early MacMillan family, and was likely used in a church as a deacon's bench.  It is a Windsor settee; it has a broad crest rail  that is characteristic to the earlier form of Windsor style, and scrolled arms and flat stretches which were only introduced later, putting the date of this bench in the second quarter of the 19th century.

The most interesting feature of  the furniture we have in our collection are the marks and scratches on their surfaces, created by the many people who had used these pieces before us. This bench is quite worn, which suggests it was well-used and well-loved, and leaves us to wonder who had sat on this bench, and what experiences have happened around it.

Most of the information above was taken from" The Heritage of Upper Canadian Furniture" by Howard Pain, where this bench, and several of our other artifacts, are featured. This book can be found in our reference collection.
- August 13, 2013 No comments:

This family's records were found in the St.Colomba Cemetery Register. If you are looking to do some genealogy work on your family from Glengarry County, feel free to contact the museum and arrange an appointment to browse the many records we have in our reference collection.