This week’s interesting artifact blog post features a set of stereographs from 1901 with accompanying stereoscopes. The stereograph was the 19th century predecessor of the Polaroid. To use, two almost identical photographs were mounted side-by-side, the left photo represents what the left eye would see, as well as for the right. A stereoscope was used by looking through two lenses which contained mirrors or prisms to alter the view of the photograph. When observing the photos through the stereoscope the photos will converge into a three-dimensional image – an amazing illusion for anyone of that time.
By the late 19th century the stereograph was so popular that it is said that they could be found in every Victorian home - regardless of class. The stereograph became the first ever mass-produced photographic image. They could be bought alone or in sets ranging from inexpensive card mounted photographs to more costly types such as those mounted on glass or porcelain.
The Museum has a large collection of these stereographic photos, all of which are from the Underwood and Underwood company circa 1901. Underwood and Underwood, established in 1882, was the largest publisher of stereographs in the world, producing 10 million prints per year. The company produced many prints with varying themes and location, they later introduced boxed sets with themes such as travel, education and religion. Photographers also became in high demand during this time to travel the world and provide new and unique prints for the company. Overall, the Underwood and Underwood company produced 30,000-40,000 titles before discontinuing production in 1920.

Artifact of the Week - Equestrian Bits

During the 1800’s, horses were relied heavily upon for travel as well as work. Having proper equipment for them was incredibly important. The design and creating of these bits was the responsibility of the blacksmith. Bits were most often made of iron as it was more freely available and easily molded into the designs required. When making these bits, two techniques were most often used: hand forging or casting. Hand forging is a process in which metal is heated to very high temperatures or red heat and then beaten or carved into shape using various tools. Casting is a process in which the chosen metal is melted down and poured into a mould. 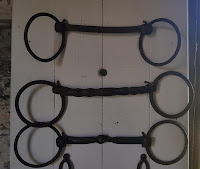 The Glengarry Pioneer Museum has a large collection of antique equestrian bits, all made of iron but with many different uses that we will explore in this post. Our first grouping of bits was used primarily for general riding or working on horseback. They are primarily a snaffle style bit meaning a bar with a hoop at either end for the reins to attach to. These bits could either have a jointed or mullen (straight) bar for differing control: jointed bits provided more control but are considered slightly more severe while mullen bits tended to be a more gentle mouthpiece. The bars could also be made from twisted iron, which created an incredibly severe bit - they are no longer made today. 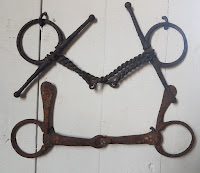 Our second and larger group of bits were primarily used for driving horses; these would have been used for pulling carts, carriages and farm equipment such as plows. Driving bits must have cheekpieces on the outside hoops to prevent the bit from slipping through a horse’s mouth while working. Large pieces or bars on the outside of the mouth also allowed for more control as you could turn the whole head more easily. Most driving bits involved a half cheekpiece (bar on one side of the hoop) as it allowed for more control without the bar getting caught in the harnesses or reins when driving. These bits could be custom made for the kind of control one needed: bits can create pressure in places such as the bridge of the nose, chin, corners of the mouth, roof of the mouth, tongue and poll (the area behind the ears), allowing the bits to be personalized for not only the horse but the rider as well. 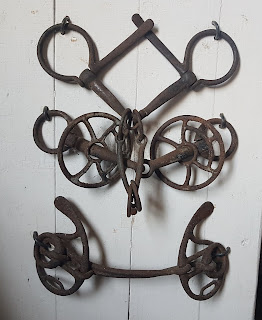 Modern bits are still used and made in many of the same ways and styles, however, very few are made from iron anymore: they are made from lightweight and rustproof metals such as stainless steel, nickel and copper.