Blacksmith, Tinsmith, Carpenter, Lumberman, Shoemaker, Doctor, or weaver – The list goes on. For every pioneer trade, there are a multitude of tools that go with it. Every Tuesday, we will feature a tool from the collection. Some, like this bloodletting knife, may seem outlandish today, but was considered essential for a doctor or “Barber Surgeon” in the 19th century.

The process of bloodletting was the release of large amounts of blood from either veins or major arteries and it was believed to cure many ailments. This process of removing blood from the body to purge toxins from the system can also be traced back as far as 1000 B.C.E. when people were looking for explanations for many bodily illnesses of the time. Although today this is viewed as absurd, it was regarded as a common treatment for almost 2000 years.

During the 19th century, bloodletting had become such a widely used operation that barbers, which were the surgeons of the time, began to advertise their ability to perform such tasks. A person would have the local doctor attend their home and often times he would recommend a session of bloodletting, at which the patient would travel to the local barber surgeon to have the procedure done. This medical treatment was used right up until the late 1930s, but quickly people were discover that it was often making people more ill or even in some extremes death.
- June 30, 2015 No comments: 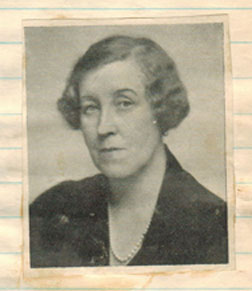 Above: Photo of Lady Tweedsmuir from the first page of the Dunvegan Tweedsmuir History Book

Welcome back to the weekly blog! This year we are introducing Tweedsmuir Thursdays, one of two weekly blogs. Tweedsmuir Thursday will feature fascinating stories, photographs, clippings, etc. from the museum’s Dunvegan Tweedsmuir collection. What is a Tweedsmuir? Tweedsmuirs are local histories that were compiled by Women’s Institute branches beginning in the 1940’s. They were named after the Governor General of Canada from 1935-1940 and his wife, Lord and Lady Tweedsmuir. Lady Tweedsmuir was a member of the Women’s Institute in England and while visiting Ontario, she took great interest in the Women’s Institutes and was made an Honorary Life Member of the Federated Women’s Institute of Ontario. She became very passionate about preserving the history of the Canadian people and advocated for the WI branches to compile village history books in order to preserve the history of each community.

Tweedsmuirs resemble scrapbooks because they contain historical information in various formats like newspaper clippings, photographs, handwritten histories, etc. Every Tweedsmuir is different and styled in a unique way. Despite this, they all contain various historical information on the community including; churches, schools, land and property, events, war effort, biographies, and earliest settlers, etc. In January 1942, a motion was made and seconded by the Dunvegan Women’s Institute that the history of Dunvegan be written.

What is the Women’s Institute? The WI was founded in 1897 by Adelaide Hunter of Hamilton, Ontario. After the death of her first child from drinking unpasteurized milk, she dedicated her life towards the education of women. Adelaide gained a large following which led to the development of the first branch of the Women’s Institute.


The Dunvegan Women’s Institute began on April 2, 1935 with a meeting of twenty ladies. Mrs. Mary Chisholm and Mrs. Mary MacIntosh thought it would be enjoyable to have an organization that every woman, regardless of race or faith, could attend.

In May 2001, the Dunvegan Women’s Institute disbanded. Their contribution to the community and dedication to the preservation of our local history will not be forgotten.

Stay tuned for exciting stories from the Tweedsmuirs that will be shared with you this summer.
- June 25, 2015 No comments: