During the Napoleonic Wars (1799 – 1815) the British Government created regiments known as ‘fencibles’ for home service. These fencibles began in 1803 and were created as temporary units used to protect British interests throughout North America. These fencibles were only meant to serve in uniform within Canada and not be deployed over seas. Each regiment was assigned their own unique uniform in order to distinguish themselves from the British Army’s red uniform.0 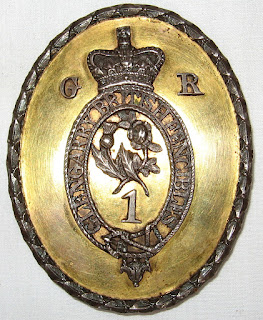 The Glengarry Light Infantry was raised in 1812 by Alexander MacDonell of St Raphael’s. This group was made up of men throughout glengarry county, who would serve in Upper Canada and Glengarry. Their uniforms were distinguished by dark green coats and pantaloons, accompanied by a black cap with a green plume and 3 lines of silver buttons displayed on the coat. The Glengarry Fencibles participated in battles at Ogdensburg, Sackets Harbour, York, Lundy’s Lane and Cook’s Mills. The regiment was later disbanded in 1816.
The museum has in its collection a badge from the Glengarry Light Infantry. This badge made of brass and reads “Glengarry British Fencibles” on the front. It belonged to Captain James MacMillan from the 9thof Lancaster. Captain MacMillan served in the 1st Glengarry Fencible Regiment and served in both Europe and Upper Canada with the British Army. It was donated to the museum by Rev. Somerland MacMillan of Scotland.
If the military history of Glengarry and the fencibles that accompany it spark your interest, be sure to attend the museum’s 1812 Living History Re-Enactment! On September 29th and 30th join us for displays of military and civilian camps, daily battle re-enactments, and many great artisans and tradespeople. Its sure to be a weekend of 1812 excitement!
- August 28, 2018 No comments:

With the Harvest Fall Festival fast approaching, this blog post will be focusing on the practices and tools involved in the harvesting of corn. 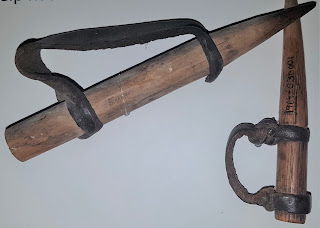 Corn has always been an important crop in farmers fields creating not only a food source for humans and animals but for food production and bio-fuel as well. It has become a staple food and energy source with its production surpassing that of wheat or rice today; Canada alone produces over 10 million metric tonnes of corn per year. However, corn wasn’t always produced in such mass amounts; before the days of industrial farming and the equipment that accompanies it, all corn harvesting was done by hand with tools from the museums collection. 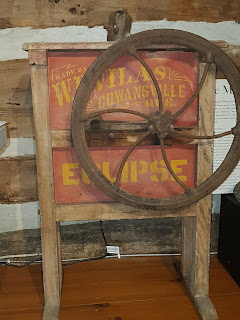 When harvesting time arrived in the fall, the corn had to be removed from the stalks by hand, this brought about the invention of the husking peg. A husking peg is a small wooden spike, used through mid to late the 1800s, that would be hand held or attached to the hand with a leather strap. This peg would be pushed under the husk of the corn and pulled downwards, ripping open the husk. The corn could then easily be pulled and cut from the stalk. Once all corn was harvested, the kernels would then need to be separated from the cob, this could be done by hand or with the use of a corn sheller. A corn sheller is a machine in which a single corn cob is inserted, and a wheel is turned stripping the cob of kernels. The kernels are then emptied from the bottom while the bare cob is removed from the side. These were common tools on a farm having been used from as early as the 1840s until the 1950s.
Since harvesting corn required so much effort for the small yield, work bees would often be organized to combine the work with others. These bees were often held in the evening and would be accompanied with games and music. Piles of harvested corn ears were arranged in the center of the room and people make it a competition to see how many ears of corn they can husk. These activities not only raised crop output but community morale and relationships as well.

As this year’s harvest season approaches and gardens bloom with their produce, keep the Fall Festival on September 9th in mind as we are looking for always appreciated donations. If you would like to donate preserves, baked goods, produce, or plants, please contact Barbara Newman (613-678-6845) or the museum directly.
- August 22, 2018 No comments:

This week’s featured artifact at the museum is our hair wreaths and a receiver box. 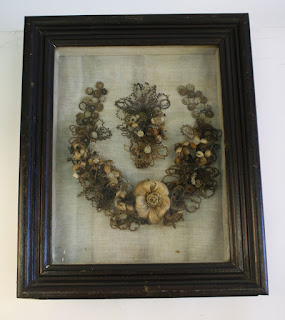 Hair art traditions date back as far as the 12th century, however, it was during the 1800s that this tradition became increasingly more popular. This popularity came about due to two events: the American Civil War and the passing of Queen Victoria’s husband Albert in 1861. During wartime, thousands of mourning families wanted a way to respectfully honor their dead, this brought about hair collecting. Queen Victoria took to wearing all black until her death and wore a piece of hair jewelry with Alberts hair to accompany every outfit. This display made public mourning a socially acceptable practice. Later, this practice became not only a sign of mourning of those passed but as a gift of affection for current loved ones as well. 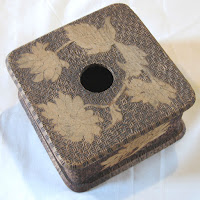 Hair of deceased as well as current loved ones would be collected in a hair receiver until enough was gathered to create an item of jewelry or a wreath. These receivers were often decorated wooden or porcelain boxes with holes in the top to collect the hair and often kept prominently on a dresser.
Once collected, the hairs were woven around wires and bent into intricate designs often including flowers and leaves. Hairs of the most recently deceased would be placed in the middle, with the other hair pieces following around the wreath. Wooden or glass beads, ribbons and buttons were also included in the designs. Hair wreath designs are often horseshoe shaped, used for good luck, and placed upwards in order to catch luck for those represented in the wreath. 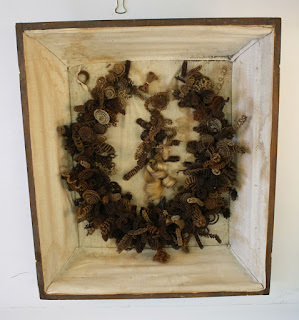 When completed, the hair wreaths would be displayed in a prominent position in the household or given to loved ones as gifts. See attached photos of one of our collections’ hair wreaths and a receiver.
- August 08, 2018 No comments: