This week we are featuring an agricultural tool called a winnowing basket which is used to separate grain from the chaff. After being harvested, farmers would bring the grain into the barn to be threshed, which involves beating the grain with a flail to loosen the grains from the husks. It would then be placed into the winnowing basket where the farmer would toss the recently flailed grain up from the basket into the air. With both barn doors open it would create a cross breeze which would allow for the wind to blow the light chaff away and the grains would fall back into the basket. The grain would then be ready for the grist mill where it would be turned into flour. Different techniques included; using a winnowing fan (a shaped basket shaken to raise the chaff, like the one from our collection shown in the picture) or using a tool (a winnowing fork or shovel) on a pile of harvested grain.


Today, in developed areas, the process of threshing and winnowing grain is mostly done by machine usually by a combine harvester, which harvests, threshes, and winnows the grain all while it is still in the field. 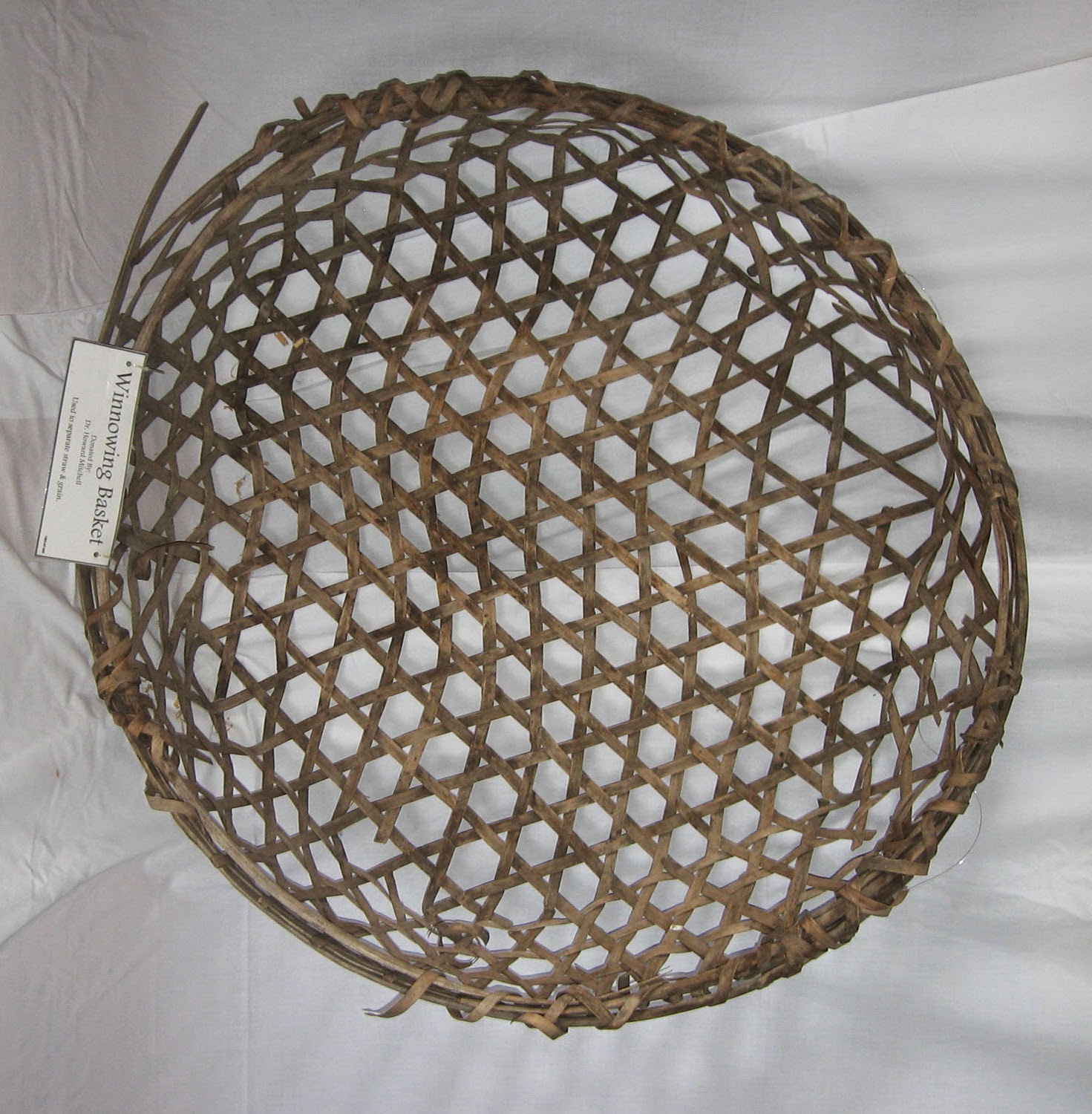 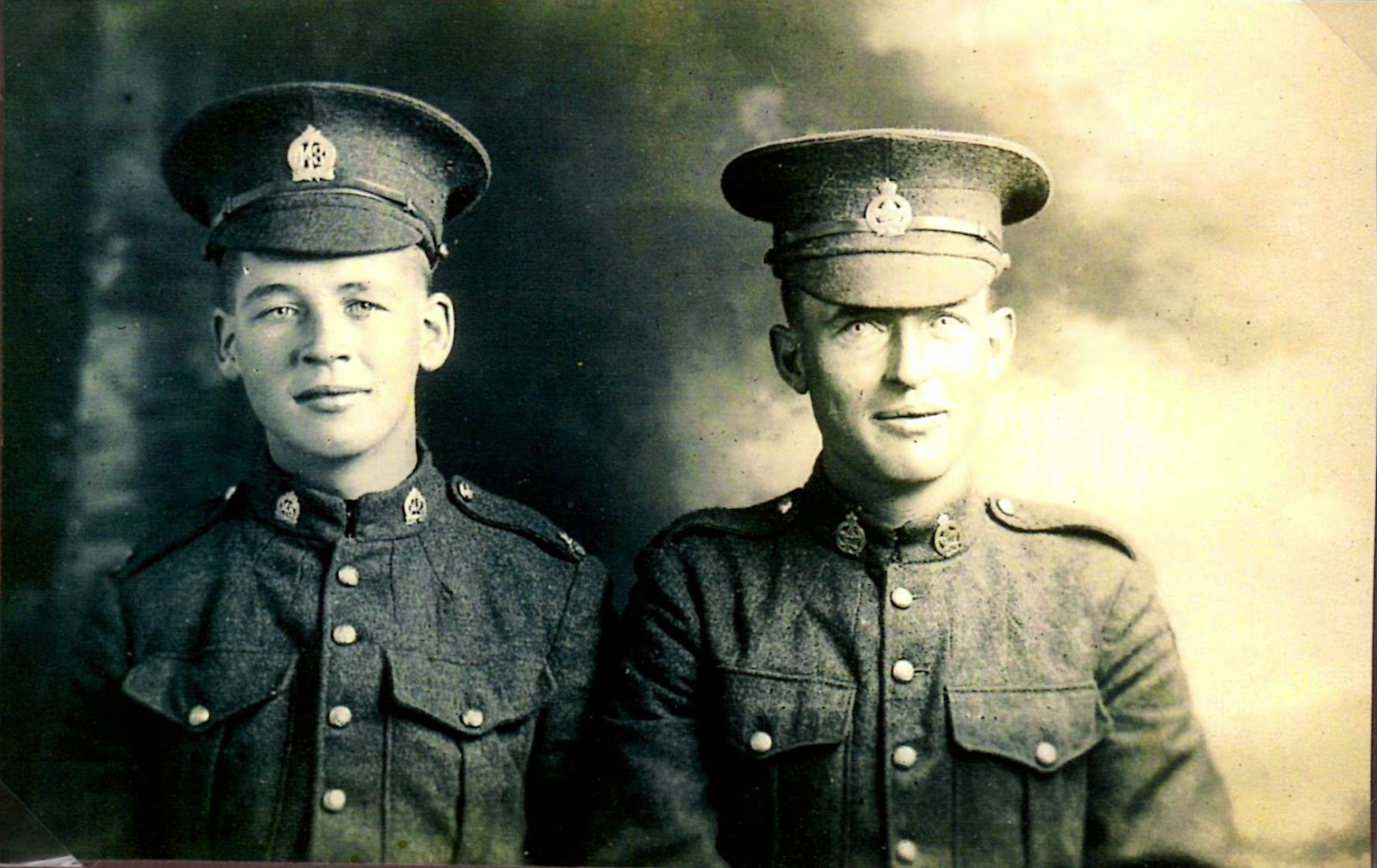 This photograph features Pte. Oliver Barton  & Pte. Gilbert Fraser Barton, a set of brothers from Lochinvar in Glengarry County. Both Bartons served in the Great War, and lost their lives as a result of the tragic conflict.  They were the sons of Margaret Sarah Fraser & Robert Barton, who also had seven other children.

Pte. Gilbert Fraser Barton, shown on the right, was the older brother of the two. He was born on December 29th, 1895. At 20 years old, he enlisted into the Canadian Army at the Ottawa Recruitment Office.  He spent a portion of the next two years serving in different battalions, and suffered a bout of Scarlet Fever.  On March 30th 1918, Barton received gunshot wounds to his side, and was removed from the field. On April 1st, he passed away in hospital from his injuries.

Oliver, who is pictured on the left, enlisted into the army when he was 18 years and 9 months. He was assigned right away to the 137th Battalion for The Theatre of War in France.  He served for most of 1916, until October 8th, when he is reported missing and then listed as “Killed in Action.” There is no further information available on Pte. Oliver Barton.

Author’s Note:
The Barton brothers, as well as the other soldiers that will be featured on this blog, are remembered for their strength and devotion to their country. This blog does not aim to glorify the war- all wars are tragic and horrific periods of history- but to remember and pay tribute to those lost in these agonizing conflicts. It is to ensure that their stories are heard, and their lives are cherished.
- June 21, 2014 No comments:

Before tractors, farms needed some form of power to run mechanical equipment. Horsepower was the most versatile and plentiful form of power at the time. They required a little water and some hay for fuel and they’d be good to go. Generally, very simplistic and scalable, so if you needed more power you would simply get more horses.

This is a treadmill powered by a horse walking on an inclined conveyor. This unit would power something like a threshing machine which is used to separate the grain seed from the stalks. This treadmill is part of the extensive collection of antique farm equipment here at the Glengarry Pioneer Museum and was donated by Norman M. MacLeod.

A horse would be put in the middle of the treadmill and as you can see in the photograph, the wooden treads on the conveyor where the horse walks are clearly well-worn. As the horse walks, a wheel on the side would move and a system of belts and pulleys attached the treadmill to the specific machine the farmer wanted to run. There were a few different forms of treadmills, one which the horse would be walking flat, and another like our treadmill shown in the photograph where the horse would walk on in incline in order to utilize both the pulling power and the weight of the horse which would increase efficiency. Once steam engines and tractors were developed, horse treadmills were no longer used, although the importance of the quantitative unit “horsepower” came to be developed and is still used today. 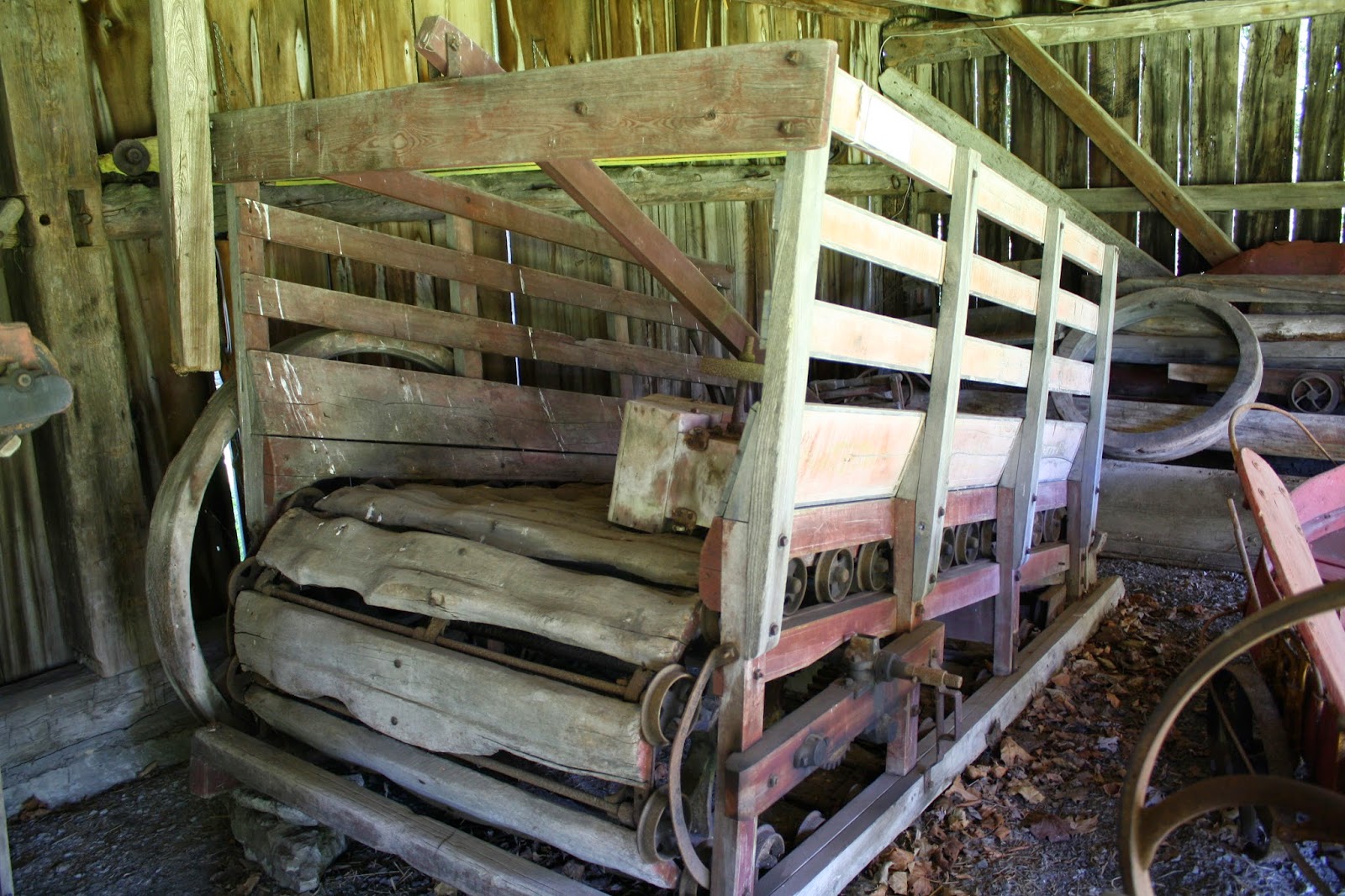 As our main mission is to preserve the early settlement of Glengarry County and share it with the community, we are introducing a weekly post which will feature many of the unique agricultural artifacts from our collection here at the museum. To start things off we will share some history of our Campbell barn which houses the museum’s large collection of tools.


Although the date that the Campbell barn was constructed is unknown, it is estimated that the barn was built shortly after 1844 when the lot it was originally on was handed over from Crown land to Mr. John Campbell. This barn was used to house the Campbell’s livestock. The Campbell farm was primarily a dairy farm so inside you will find many of the tools that would have been used on a dairy farm. The Campbell farm, including the barn, remained in the possession of the Campbell family for 90 years. When Hwy.417 was going to be built in 1962 it was saved from destruction and donated to the museum by Leslie Clark.

Our first blog post features Pte. John Archibald MacDonald. Mr. MacDonald was born to Mrs. And Mr. Archie MacDonald who lived on Lot 27 in the 3rd Concession of Kenyon Township. He was the brother of Mrs. Annie MacDonald Langstaff- the first woman to graduate from the McGill Faculty of Law. Pte. J. A. MacDonald was killed in action in 1917. This portrait was taken in Alexandria around 1915.

There is memorabilia of Pte. John Archibald MacDonald on display at the museum as part of our “Glengarrians and the Great War” exhibit.  This includes his commemorative medals, pocket knife and memorial plaque- also known as a “Dead Man’s Penny.” These plaques looked similar to a Canadian penny, which is how they earned their nickname, and were issued to the next-of-kin of all British and Empire service personnel who were killed as a result of the war. They were graciously donated to the museum by Sister Clair MacDonald.
- June 07, 2014 No comments: