Our Blacksmith Shop is believed to be our oldest building on site, dating from around 1800. It was operated by Hamelin in the nearby village of Apple Hill from about 1930 until approximately 1982. The ancient shop is a fascinating place, but you almost need Oliver Hamelin to show you around and demonstrate the way they used to use the various tools and pieces of equipment. This particular blacksmith shop shoed horses, made tools, repaired farm implements, sleighs and carriages, and often served as a veterinarian as well. 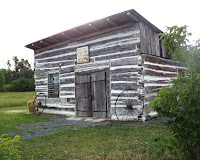 A decision was made by the Glengarry Historical Society to have the blacksmith shop moved to the village of Dunvegan. The Oliver Hamelin Blacksmith Shop was then relocated to the museum in 2000 from Apple Hill and has seen more visitors than it ever had when located in its original location. According to Douglas A. Fales, “Oliver Hamelin would never have envisioned his shop becoming a tourist attraction and on museum grounds.” Chiseled on the side of the Blacksmith Shop are numerals on each log so that the task of dismantling, relocating and reassembling the building was easier for Peter Steiche, Kent MacSweyn, Blair Williams and many other helpful volunteers. According to the volunteers, most of the cedar logs were still solid; however some logs were rotten and decayed. The original roof also collapsed during the relocation of the shop from Apple Hill to Dunvegan and was replaced with a new one.

The Anatomy of his Shop 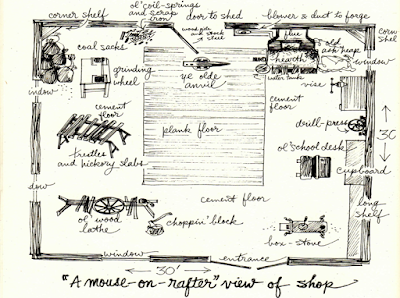 “What seems a state of disorder in busy work areas can be misleading. Disorganization is one thing, but an “organized jumble” is quite another!”  - Oliver Hamelin
- August 16, 2016