Featured Artifact of the Week

This week's featured artifact is a relatively simple object that doesn't necessarily jump out at you but one that served a significant purpose to a certain group of people. This is an iron pot that was apparently used between 1746 and 1747 by the seven (later eight) outlaws of Glen Moriston. The outlaws used this pot to cook in while they hid Bonnie Prince Charlie after the Battle of Culloden. 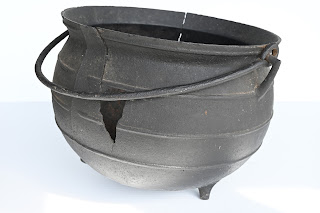 The pot was donated by the late Mickey McDougall to Glengarry Historical Society and Glengarry Pioneer Museum founder Hugh P. MacMillan for the purpose of display in the museum. McDougall's great-great-grandfather was one of the seven outlaws and brought the pot with him when he emigrated to Glengarry County. His name was Alexander Chisholm.

The museum would like to acknowledge the late Hugh P. MacMillan for the backstory regarding this iron pot that is now a cherished artifact in the collection.